By Liis Hainla. Updated: January 2023.
We may receive a commission for purchases made through the links in this post. Learn more. 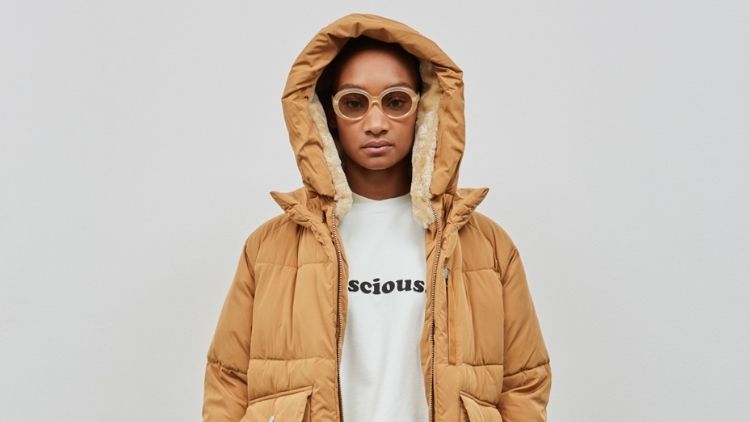 Gone are the days when humans needed to skin animals to keep warm. The best jackets in 2023 are entirely vegan and cruelty-free.

Discover quality vegan jackets from Save The Duck, Noize, and other ethical companies. With vegan insulation surpassing down in quality, you can also find vegan-friendly jackets from Patagonia, Marmot, The North Face, and other leading outerwear brands.

So either you are looking for a cozy parka or light spring jacket – see our list of top vegan jackets and vegan winter jackets for men and women.

What Is A Vegan Jacket Made Of?

A vegan jacket is free from animal materials such as leather, suede, wool, fur, and bird down. Vegan jackets are made from plant-based and synthetic materials like cotton, polyester, nylon, fleece, microfiber, faux leather, and synthetic down.

Bird Down Vs. Synthetic Insulation

The most common thing that makes a jacket not vegan is down. It is an insulator derived from geese and duck feathers. While plucking live birds illegal in many countries, it is sadly still a common practice causing pain and severe injuries to the birds.

As the cruelty of down is hard to ignore, the market for synthetic down is booming. Synthetic insulators tend to be also better performing than down. Synthetic materials are better in wet conditions since they are more waterproof and quicker drying.

Which Vegan Insulator To Choose?

Some of the best vegan insulators in jackets are PrimaLoft, Gore-Tex, and 3M Thinsulate Featherless. These hi-tech insulators are trusted by many top outerwear brands such as Patagonia, Arc’teryx, Marmot, and Helly Hansen.

Many brands have also developed their own vegan insulators. Our favorite ones include the award-winning ThermoBall Eco from The North Face, ReNew from Everlane, and Plumtech from vegan company Save The Duck.

Here are the best companies for vegan jackets. Shop warm vegan winter jackets made with sustainable synthetics that protect you from every weather. Enjoy modern styles that are down-free, cruelty-free, and vegan.

Save The Duck makes beautiful vegan jackets from ethical and sustainable materials. The vegan winter jackets use exclusive Plumtech padding that is warm, fluffy, and breathable.

From trendy vegan puffers to faux wool coats, Noize has every type of jacket imaginable. The Canadian company is ethical and eco-friendly using insulation made from recycled PET.

Vegan brand Wuxly offers the warmest vegan jackets in the world. Using hi-tech and recycled materials, the luxury vegan jackets are customizable and ethically made in Canada.

Alpine North is another Canadian brand that specializes in vegan snow jackets and parkas. Their products are 100% vegan, cruelty-free, and also reasonably priced.

Women’s vegan jackets from Culthread are handmade from recycled and deadstock fabrics. Their puffers and faux fur coats are super cosy and trendy.

Based in New York, Harper Coats designs high-quality vegan jackets for women. Enjoy timeless styles that will keep you cozy through the seasons.

For All Kind makes gorgeous vegan puffers and parkas using PrimaLoft Gold – the highest performing synthetic down on the market. They also have beautiful vegan sherpa jackets.

Norden was born to fill a void in the fashion industry: to offer sustainable vegan jackets that are also affordable. The jackets are ethically made from recycled plastic waste.

Famous for their activewear, Girlfriend also has a great collection of down-free vegan jackets. Their puffers and fleece jackets are made from recycled materials.

Swedish company Dedicated is cruelty-free, vegan, fair, and sustainable. Their ethical vegan jackets are made with organic cotton and recycled plastic.

Bleed is an ethical vegan apparel company from Germany. Born in the Alps, they design high-quality vegan insulated jackets as well as light jackets made with organic materials.

Matt & Nat is known for its contemporary vegan accessories, shoes, and outerwear. Their vegan spring and rain jackets are thoughtfully designed and minimalist.

Embassy Of Bricks And Logs

This vegan brand has partnered up with a vegan chef and YouTuber Gaz Oakley. The result is the most stylish collection of vegan puffers made from post-consumer waste.

Are you looking for a specific kind of vegan jacket? Here is a list of every type of vegan jacket available online. Shop modern and high-quality styles for winter, spring, and fall.

Vegan brands Noize, Save The Duck, and Alpine North have the best selection of vegan puffers. We also recommend vegan-friendly puffers from some otherwise not vegan brands.

A quality vegan ski jacket is always worth the investment. Enjoy high-performing jackets that are 100% vegan and tailored for skiing and mountaineering.

Your spring outfit is not complete without a vegan leather jacket. Explore these beautiful vegan biker & moto jackets made with premium faux leather and heavyweight cotton.

Denim jackets can include animal materials that should not really be there. These fantastic brands offer vegan denim jackets that are 100% animal-free.

Check out our favorite vegan windbreakers and bomber jackets for 2023. These styles are also great for running and exercising.

For waterproof vegan jackets and coats, these are our top picks. The selected vegan raincoats are durable, stylish, and 100% cruelty-free.

Trench is here to stay. Discover modern vegan trench coats for women from these ethical, sustainable, and vegan-friendly brands.

Discover the most elegant faux wool coats for women. These vegan companies have replaced animal wool with amazing synthetic alternatives.

For men’s vegan overcoats, we recommend the selection of Brave Gentleman.

Vegan jackets do not need to cost a fortune. Stay warm with these cheap vegan winter jackets for under $200.

What are good vegan jackets made of?

Good vegan jackets use good insulation. Plumtech, PrimaLoft, Thermoball are examples of quality vegan insulators that mimic real down and keep you warm in all temperatures.

Denim jackets are usually vegan and made from cotton. Just make sure your jacket does not include any animal-based elements such as leather patches or wool lining.

North Face jackets are typically not vegan and include goose down. Their Thermoball line is vegan-friendly though.

Patagonia is not a vegan brand and uses animal materials like down. But their Nano Puff line is vegan and made from recycled plastic bottles.

Are down jackets vegan?

No, down jackets are not vegan. Down is made from the feathers of geese, ducks, and other waterfowl. The birds are often plucked while still alive causing them pain and suffering.

What are vegan leather jackets made of?

As the saying goes, there’s no such thing as bad weather, only bad clothing. A high-quality vegan jacket goes a long way in making you fall in love with the outdoors.

We are glad to see synthetic insulation is taking over down with large US companies like Patagonia launching their vegan winter jackets. And it is amazing that vegan brands like Save The Duck are rocking the outdoor gear market.

We hope you enjoyed our list of the best vegan jackets. From affordable brands such as Levi’s and Obey to luxury jackets from Wuxly – we tried to include a little bit of everything for every price range.

As always, this list of companies is constantly evolving. So stay tuned for new awesome vegan jackets.